In this post you will get a look at what happens when a book cover is being redesigned. You will see every step me and author took to remake his book cover. Everything from first design concept to, different options and difference of opinions will be shown. You’ll see how we arrived at the final new cover and finished the redesign.

I hope this will be insightful and useful for everyone as this should show how Author and Designer can communicate and get trough differences to arrive at the end result that looks great. Here’s how it all happened:

Jeff had designed the book cover himself at first. It was not, by any means, the worst cover made. There are plenty of covers that look much much worse. The book is called ”The Gandy Dancer”, genre – Historical Fiction. It uses parallel story lines, one in the 1930s and one in modern times, and brings the two together in the final chapters. Main character is a newspaper reporter in Richmond, VA in modern times. He’s not exactly politically correct and he’s a bit rough around the edges, but deep down he’s a decent guy. The book is probably more mainstream though, than straight historical fiction. Audience is mostly female (60%?) but the book is not targeting women. Jeff also sent me a video from YouTube about railway workers who were called ‘Gandy Dancers’ which helped me get a better feeling about them. First cover looked like this: 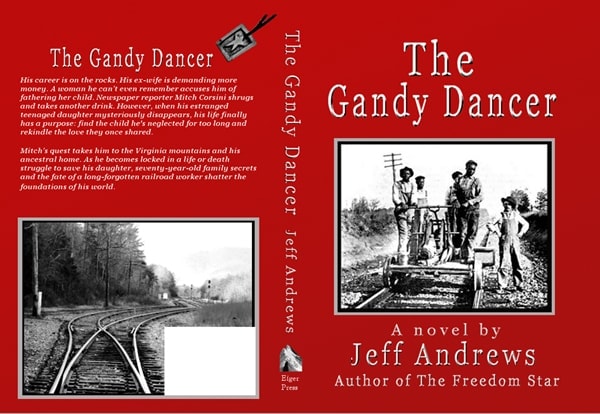 Since it was a pretty simple concept and I am a fan of Minimalistic designs I decided to go along with it and just add tweaks and details that can make it look better. That would mean changing the main font and adding details to the empty background. I started off with changing the perspective of the picture that is the main element in the design. I added a shadow and rotated it. Also placed a texture of old scratched wood in there with low opacity so that it is barely seen but still keep background busier. Another change was text hierarchy (there was none previously  made the title main thing and author name was made smaller to not distract from it). This was a rough sketch and needed further work if it was approved still (like text effect etc): 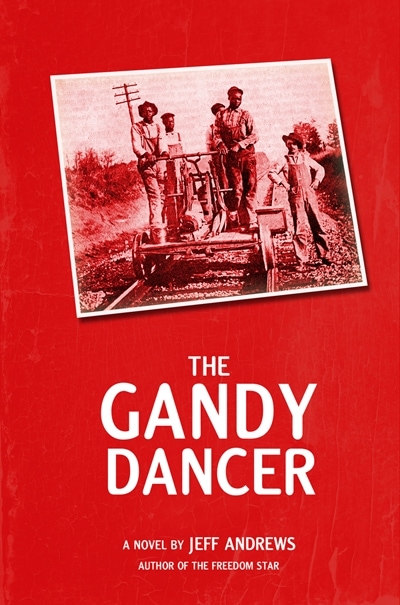 Jeff liked the idea of a pinned image and sent this reply suggesting that we run with it as there was scene in his book containing it:

[quote]I’m looking at your proposal and reacting—the red is too red for me (and the photo is picking it up) and the font style feels somewhat simplistic. That said, the piece that jumped out at me is that you have the photo showing as a photo, shadow and all. That got me thinking—a similar photo appears in the book. It’s pinned or thumbtacked to the wall of an old cabin in the woods. Perhaps we’re letting the paradigm of the old cover restrict the flow of the new one(??). How about we try using the old photo as just that, and old photo (and it is old—1911—and that’s the best copy I have). [/quote]

I liked the idea a lot as I always try to find a symbol, element that is featured or stands out in the book so that the cover is matched to the book as much as it can be (doesn’t have to be literal match as in this case, something more conceptual or even parody could be used as well).

I went off to find a good picture of pine/wood wall and a font that had a Retro look. Here is what I sent him later on according to this: 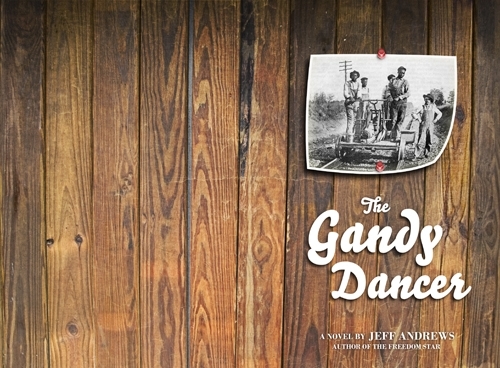 Jeff said it was bold and different so he liked and suggested some tweaks and we talked about curls of the picture, should we include a blurb on the backcover (in addition to description) etc. My suggestion was no blurb even tho it helps (maybe even no second picture for backcover because it increases printing costs and distracts from description a bit). Jeff wanted the picture but dropped the blurb so I added the 2nd picture on the back with the description. After few more exchanges we came up with this: 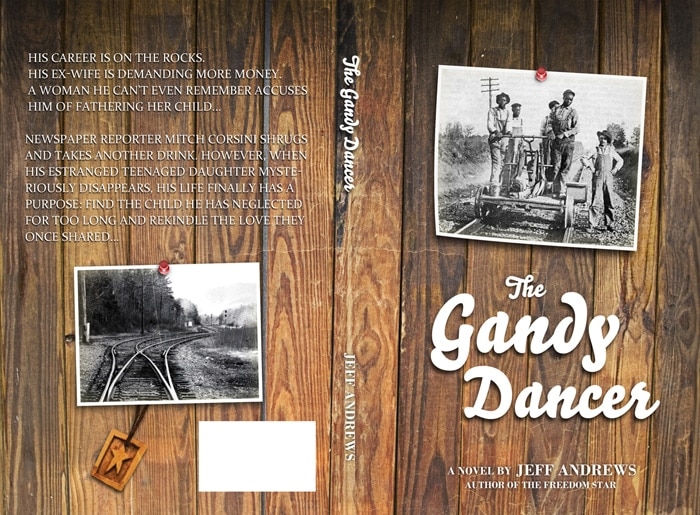 We seemed to agree on this one, but after a few days Jeff sent me an email saying that he didn’t feel completely happy with it. Especially the font which he didn’t think was representing workers as tough men (I went with their fun and relaxed attitude and singing which stuck with me most so I chose that font). He had started playing around with the layout of text and design too. To me that meant that I could have been better at communication, he was also overthinking things a bit as often happens for us creative people when we get ‘too close” to our creation. He sent me this design: 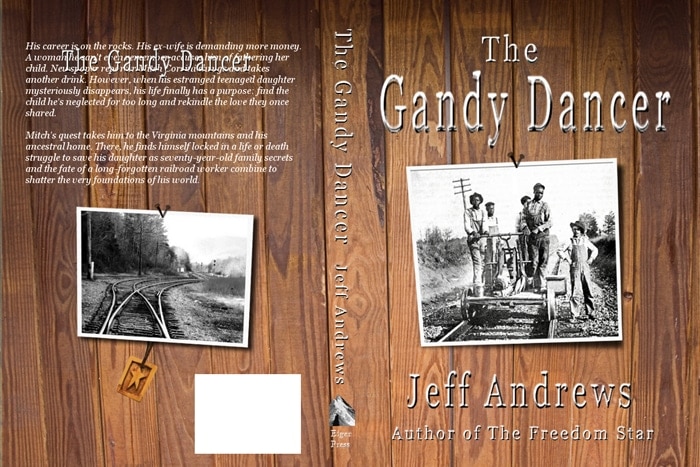 I suggested Jeff takes some time off and doesn’t think about the cover at all. It’s something that I do myself if I’m struggling with design and can’t seem to come up with great looking idea. I’ve also seen this work for musicians and writers too. We creatives get into this too much sometimes and lose perspective. In that case, ‘fresh eyes’ are what we need. When we come back to it after few days (or at least a day), we can see things differently and get new ideas. I also sent Jeff some thinks that were wrong in this design (old font got lost in the background, hierarchy of text was gone again and description text was hard to read as there was too much text crammed into one place. I did like the nail he placed there instead of a pin!).

I have to give Jeff a lot of credit for being great at taking my idea and taking a weekend off, it’s great that he didn’t hold back on his doubts too and expressed them with respect. Both sides didn’t go into any arguments etc. That’s how working together happens.

So we worked on the font again, but kept other things the same as previously agreed. I sent him 9 different options with different fonts to choose from. Out of those Jeff chose 3: 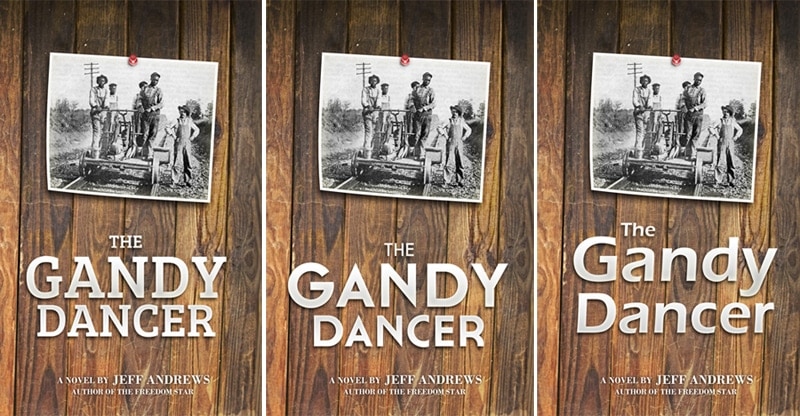 And then our final result after more back and forth suggestions and tries was this: 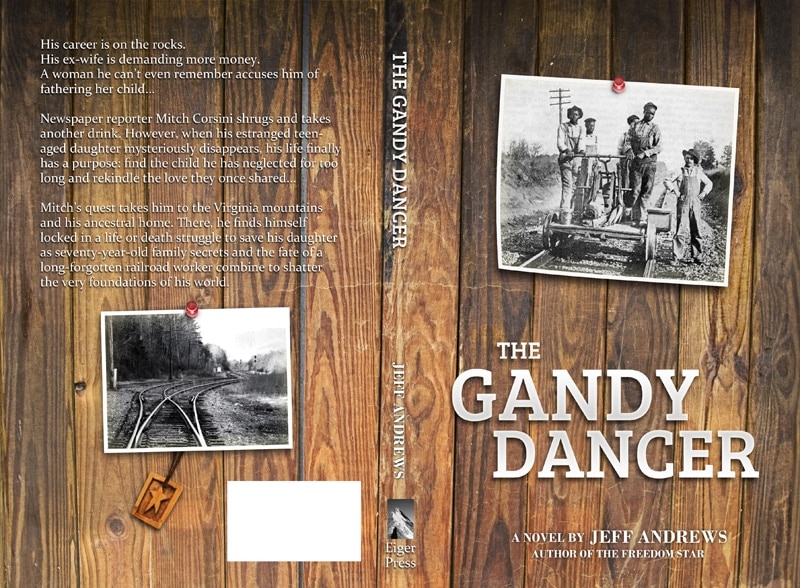 The book is now live on Amazon and is doing well. The process of creating the cover was good. I enjoyed working with Jeff and hope the book does amazingly well! You can find it here – The Gandy Dancer .

Hope this was an insightful read. If you will be working with book cover designer don’t be afraid to express your opinion, ask questions, designer shouldn’t get mad or insulted unless the expectations are unreasonable. As I like to say, book cover creation is a collaboration between Author’s Vision and Designers talent/advice. Both work to achieve best result possible.

4 thoughts on “Behind the Scenes of Book Cover Redesign: The Making of ‘The Gandy Dancer’”